Hello September! I am very excited for this month (the arrival of which I have been anxiously awaiting) because . . . later this month the Ferrets go away on retreat!

Some of us have mentioned the Ferret Retreats before (there’s even a video from our last one, courtesy of Lissa) but I (Serena) have not really talked about the topic myself, and I am so happy to be going! We’ll be off together, five of us, to a cabin away from work and errands and housework and family and . . . well, pretty much everything except our writing and each other. 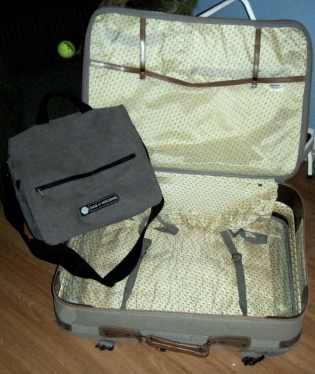 It’s not quite time yet, but my bags are ready to pack!

It seems from what they’ve said that what is really great as far as the other Ferrets are concerned is the getting away and having no/fewer distractions and being able to just write for days. That sounds so wonderful, doesn’t it? For a while – a couple of years and several Ferret retreats – I tried very hard to have that same feeling myself.

Here’s the problem though: it doesn’t work for me.

See, I, perhaps unlike the rest of the Ferrets, have a good deal of theoretically-uninterrupted writing time at home. (Aside from how sometimes distractions actually sharpens my focus. My Muse functions oddly.) So the being away from things is less of a ‘shock’ . . . and less of a help to my writing. Especially when contrasted with the admittedly-gleeful distraction posed by the extended company of the other Ferrets.

What is a huge bonus for me, though, is the simplest one of being away from things – I can’t force myself to stress out over what I’ve accomplished or not, calls I need to make, follow-ups or paperwork, anything . . . because all that is back at home. I literally can not do anything about it – it’s not here.

As mentioned, I also have the wonderful ‘break’ of sharing space with some of my very best friends – which even means sometimes I am mid-story and look up blankly and ask ‘wait I need a name/detail/complication’ or ‘what did I say about this earlier?’ in hopes that I rambled somewhat sensibly before, or that one of them will offer a suggestion from a new perspective that will help me. This is fabulous for writing productivity, and makes me far less likely to give a frustrated ‘grah’ and wander off to read, play flash games, or bake brownies instead.

I can also often find one of the others not busy writing or reading to go and poke and pester by chatting about writing-related ideas or whatever other bit of randomness floats to mind. There are walks and fresh air to be taken and enjoyed, along with the lack of people aside from the Ferrets. 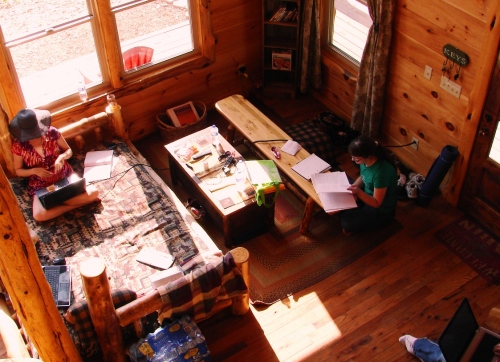 Ferrets settled in for some focused writing time. (I took this picture from the loft, but you can see my abandoned spot opposite Rebekah as well.)

Our retreats may not be a time for me to sequester myself and do nothing but write and be super-productive, the way writing retreats always seem to be touted (though I make sure to remember it is that for everyone else) in fact, I sometimes write less while we are on retreat than I would have in the same amount of time back home. They are still good for my writing, possibly just as much as they are for the rest of me, however. (And isn’t what’s good for me mentally likely to be good for my writing, in the long run, anyway?)

I have begun to enjoy our trips even more, however, as I have come to terms with the fact that I won’t sit and do nothing but write, gleeful to be away and able to do so, shutting out the world – in fact, that I just . . . can’t. It isn’t a failure to focus. I shouldn’t feel guilty that I’m not taking proper advantage. Because that’s simply not how retreats work for me somehow.

What they are is a great overall de-stresser, and lots of time for me to make writing plans while enjoying having no pressure to do anything except write (and take care of my share of the dishes and cooking) and enjoy the cabin, lying around relaxing, and conversing with friends.

There may also sometimes be found copious amounts of sugar. Ferrets like marshmallows. And campfires.

Our retreats are almost always in Autumn, so there’s also some discussion of NaNoWriMo plans, usually, both as part of our plotting night and otherwise. (For those of us who plan ahead for NaNo, and who write for NaNo every year.)

A regular feature of our Ferret Retreats is that (at least one) specific ‘plotting night’ (you may recall that it was on the very first plotting night we held that the Rabid Rainbow Ferret Society was born and named! they can obviously get pretty crazy, in the best of ways). We all sit around with stacks of notebooks, references, laptops as needed, and take turns to each pick one of our worlds or story ideas to talk out in-depth (often ones already in progress) to work out details, solve plot holes (or . . . simple and more widespread lack of plot) and handle assorted problems with each others’ help.

Even the road trip to get to our eventual destination is fun and relaxing in its own way – on our last trip several of us spent part of the way building off each others’ comments to create a mythos for the dangerous Wild Hay Bale, its habits and habitats. Crazy, perhaps, loads of fun, definitely, and a great way to stretch writer-brain muscles!

The Wild Haybales in their natural habitat, viewed from the road. (Don’t they just look sinister?)

Writing Retreats are a wonderful thing, all in all, and I highly recommend the experience, though I used to be a little sceptical of its usefulness. I also recommend letting your Muse tell you how a retreat can help you – not everyone gets the same kind of help out of them, as I discovered firsthand. Try it if you can, see what it can do for you!

So please wish us well as we run away from the world at large! We’ll return refreshed and full of ideas (and maybe some fun new stories to share) and no doubt with lots of photos, some of which may pop up on our Facebook page.

Have you ever been on a writing retreat? Alone, or with fellow writers? What did you take away from the experience?

3 thoughts on “On Retreat! (What ‘Writing Retreat’ Means to Me)”

Not sure where to start? Click here to find some suggestions!
Join 245 other subscribers