Here we are. We made it. December 31st. That shiny midnight that heralds the dawn of a new year is so close I’m pretty sure I can reach out and touch it, but don’t tell 2016 I said that… it will find a way to postpone it even more.

I think we can all agree that this year has been rough at best. In the realm of celebrities I’m pretty sure we’ve all lost at least one person we really admired. We don’t discuss politics on this blog, but if you’re in the United States you know that no matter your views this election was a mess of bamboozlery, misinformation, and high-strung feelings.

If you’re a Ferret, SOMETHING unfortunate happened to your car at least once this year. We’ve all come out of it with working vehicles, but at times it’s been dicey. We’ve had a car go swimming (okay, that was technically my husband), another hold a late-night rendezvous with an already-dead deer, and several others deal with a long list of issues including batteries, power-steering, brakes, and more. The people have stayed safe, but the cars? Not always…

Several Ferrets (or spouses) dealt with job-related issues. When incomes are already tight, possibly losing (or actually losing) a job is not something you want to add to that list! Incomes in general have been an uphill battle for a variety of reasons for just about all of us. Why aren’t we all famous authors yet?

Health is always an interesting subject. With one Ferret diagnosed with an autoimmune disorder, another Ferret who should be (if we can figure out what she has), and a third Ferret who may also have issues in the same realm, we can be a real fun bunch. I miss the days when “flare” meant the thing that people use on the side of the road to be seen. I personally have been extremely grateful for health insurance because even with it my household has racked up thousands of dollars in medical debt this year alone. Did I mention it’s been rough?

I have a major $8,000 or so repair that needs handling ASAP on my home. Another Ferret actually had earthquake damage from Oklahoma’s biggest earthquake ever recorded! (5.8 magnitude) And there’s a long list of other repairs and appliances we are all watching with wary eyes as we beg them to not need our attention just yet.

Oklahoma weather has been all over the place (as per usual) giving us tornado warnings and temperatures that swing so fast they might make you motion sick.

And yet…. this year we wrote poems and stories and made art. We made (and ate) some pretty awesome food. We held a few get-togethers with friends and we survived the family drama. We fangirled. This particular Ferret managed to run away internationally at least for a little while. We loved on our pets and added two new kittens to the hoard of our familiars. We tried a dozen different kinds of ‘planners’ that all promised to whip our life into order. (We’ll let you know if the bullet journals work out.) We were emotional. We were bizarre.

We were the Rabid Rainbow Ferret Society. And last night we came together for our annual end-of-year tradition, Ferret Christmas, where we eat ‘hug-in-a-bowl’, get far too excited and loud for the strangest of conversations, and happily fling gifts at one another as we end the holiday season on a multi-colored note of positivity. 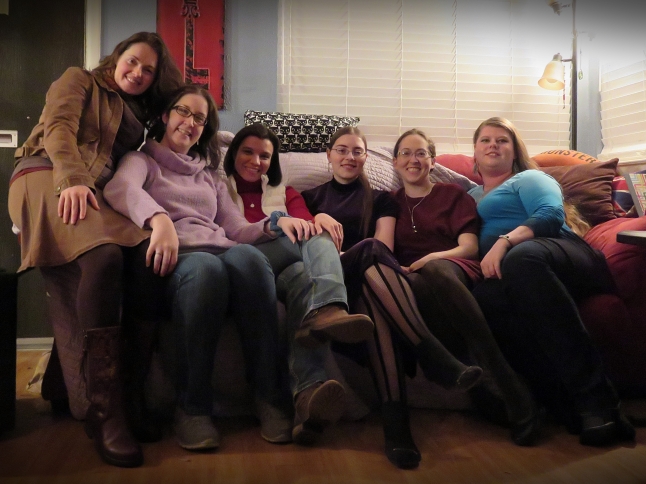 Not sure where to start? Click here to find some suggestions!